The Congressional Budget Office (CBO) recently scored the Better Care Reconciliation Act of 2017.  What did they conclude?

The good news: The Better Care Reconciliation Act of 2017 is a fiscally responsible bill.  According to the Congressional Budget Office (CBO), Better Care cuts taxes by $701 billion between 2017-2026 but would also cut spending by $1,022 by that time period.  Additionally, in the long-run premiums would fall (more about premiums and out-of-pocket cost below).

The bad news: The number of uninsured would increase by 22 million by 2026.  This is largely due to cuts in Medicaid, cuts in subsidies for the health insurance exchanges, and primarily because the penalty for  not having insurance would be eliminated.  Additionally, some nongroup health insurance exchange markets would become unstable as healthier individuals exit the market, as insurers exit the market leaving individuals with fewer choices; however, the CBO estimates that only a few sparsely populated areas would have few insurers.

Mixed: CBO estimates that Better Care would “increase average premiums in the nongroup market prior to 2020 and lower average premiums thereafter, relative to projections under current law, CBO and JCT estimate.”  In the short run, healthy individuals would likely exit the market driving up premiums.  In the long-run, reducing the generosity of the silver plan health insurance (lowering the actuarial value from 70% to 58%) would reduce premiums after this provision kicks in. However, the reduced generosity means that the share of cost patients would pay would increase.

How certain are these estimates?  Predicting the future is no easy task.  However the CBO states:

Despite the uncertainty, the direction of certain effects of this legislation is clear. For example, the amount of federal revenues collected and the amount of spending on Medicaid would almost surely both be lower than under current law. And the number of uninsured people under this legislation would almost surely be greater than under current law. 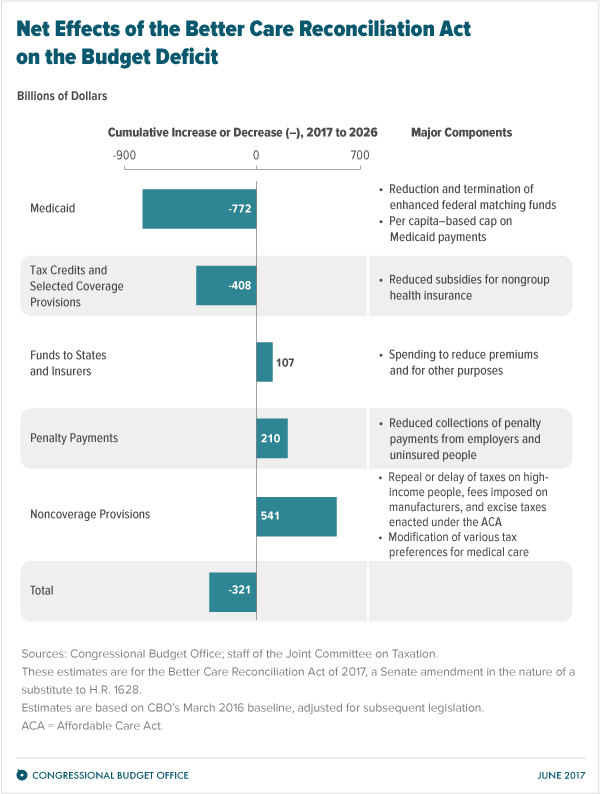