Medicare provides health insurance for 58.4 million Americans.   To provide health care to largely elderly Americans, it spent $710 billion in 2017.  One key question is, does the federal government have the funds to continue to support this program as the baby boomers retire?

According to the 2018 Medicare Trustees report, the answer is increasingly pessimistic.  The Medicare Trust Fund will run out of money by 2026, three years earlier than previously anticipated.

…the trustees projected lower wages for several years, which will mean lower payroll taxes, which help fund the program. The recent tax cut passed by Congress would also result in fewer Social Security taxes paid into the hospital trust fund, as some higher-income seniors pay taxes on their Social Security benefits.  The aging population is also putting pressure on the program’s finances.

Some other interesting points: 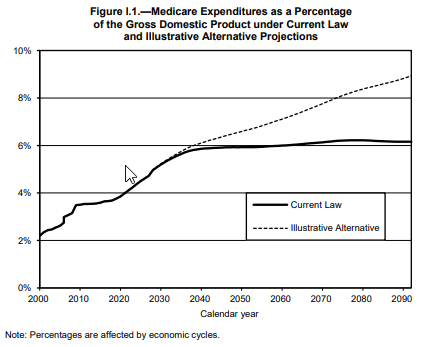