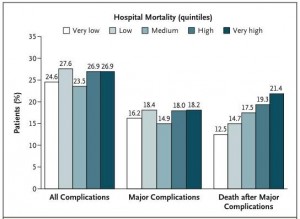 How can doctors decrease mortality due to complications?  Gheferi, Birkmeyer, and Dimick recommend “timely administration of antibiotics in patients with sepsis, the rapid transfer of a patient to an intensive care unit (ICU), and the availability of interventional cardiologists during an acute myocardial infarction.”