The reason is that the vast majority of Medicaid beneficiaries don’t spend too much money.  Medicaid is expensive mostly due to the few people each year who are hospitalized, or require long-term care.  This chart from the Washington Post demonstrates this fact. 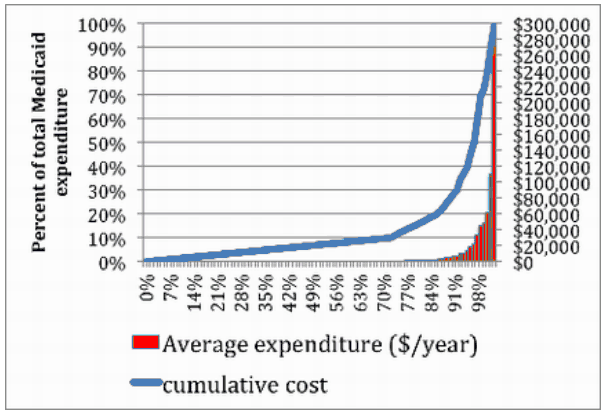 The bottom 72 percent of Illinois Medicaid recipients account for 10 percent of total program spending. Average annual expenditures in this group were about $564, virtually invisible on the chart. We can’t save much money through any incentive system aimed at the typical Medicaid recipient. We spend too little on the bottom 80 percent to get much back from that. We probably spend too little on most of these people, anyway. For the bulk of Medicaid beneficiaries, cost control is less important than improved prevention, health maintenance and access to basic medical and dental services.

The real financial action unfolds on the right side of the graph, where expenditures are concentrated within a small and incredibly complicated patient group. The top 3.2 percent of recipients account for half of total Medicaid spending, with average expenditures exceeding $30,000 annually.

Pollack continues to state that many of the high-cost users are individuals who face life-threatening illnesses, or have cognitive/psychiatric limitations. As these patients are poor, their ability to cover any type of cost sharing is limited.