Health Economists often use the cost per quality-adjusted life year (QALY) metric to answer this question.  QALYs are used to measure not only the additional years of life from a treatment, but also the quality of life.  For instance, you may prefer to live 1 year in perfect health to two years in a coma.  A QALY of 0.5 can indicate that the patient lived for 6 months in perfect health or for 1 year at a 50% health level.

A first and direct approach is to ask respondents about their WTP for small health increases/QALYs using stated preference (SP) techniques such as discrete choice experiments or contingent valuation. The WTP estimates can subsequently be used to estimate the WTP for a gain in a full QALY. A second approach is to use the monetary value of preventing fatalities (the value of a statistical life), on which there is a substantial empirical literature, in order to implicitly derive the WTP-Q assuming a certain life expectancy (LE) and discount rate for the sample on which the value of life is derived.

Payers often used the cost per additional QALY to determine if a product is cost effective.  Countries often only approve reimbursement for a therapy if the cost per QALY falls below a certain threshold.  Ryen and Svensson (2014) write:

The authors look at the literature on the value of a QALY and find significant variation across studies. 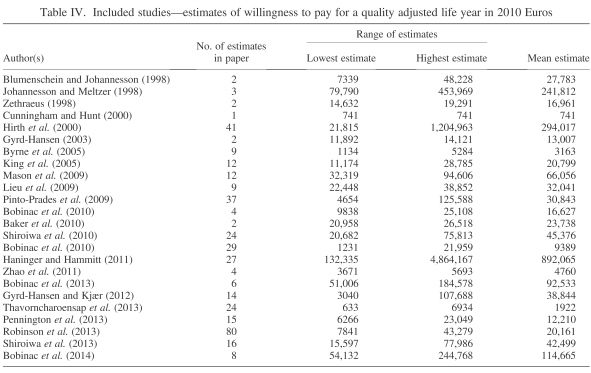 Some additional conclusions from the authors:

We find that individuals have a higher WTP if the QALY is based on length of life improvements compared with QoL improvements. Further, the evidence indicates that there is a problem with scale bias, that is, WTP is not linearly proportional to the QALY change respondents are asked to value, which implies that WTP-Q is lower if respondents are asked to value higher changes in QALY.