Oftentimes, researchers use dummy variables to determine how observations classified into different categorical groups affect the dependent variable of interest.  One drawback with this approach is using too many dummy variables can create small cell sizes, creating an identification problem.  Alternatively, using broad groupings for dummy variables may give the appearance that the effect of the covariate is homogenous within the category when this is not the case.

An alternative to using simple categorical dummy variables is to use overlap polynomials.  For instance, Lakdawalla,  Goldman, and  Bhattacharya have a working paper where they rely on the difference of normal cumulative density functions (CDF) to create a flexible form to build these overlapping polynomials.  In particular, they use the following specification:

Here is the equation from the paper in larger type.

Below I decribe how this function works in practice. 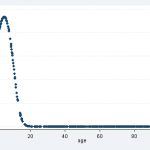 The second spline can be produced as follows: 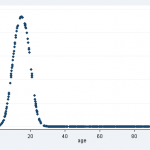 And combining the two we get: 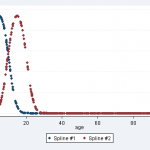 Finally, we can create the equation g(agei,β). 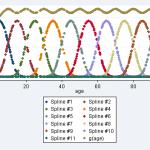 The graph below shows each of the individual components of the spline. The top curve is the cumulative value of g(age) when pj=1. In practice, one would ensure that pj contains coefficients so that the effect of age on the dependent variable could change for each of these splines. One can see that by using this flexible formulation, fewer dummy variables are needed and the effect across age groups is smoothed.