Like most years, in recent history, the Congressional Budget Office’s 2014 Long-term Budget Outlook is not rosy.

Between 2009 and 2012, the federal government recorded the largest budget deficits relative to the size of the economy since 1946, causing its debt to soar. The total amount of federal debt held by the public is now equivalent to about 74 percent of the economy’s annual output, or gross domestic product (GDP)—a higher percentage than at any point in U.S. history except a brief period around World War II and almost twice the percentage at the end of 2008…Twenty-five years from now, in 2039, federal debt held by the public would exceed 100 percent of GDP

The good news for fiscal hawks is that healthcare spending has slowed in recent years. In fact, CBO stated that it has “substantially reduced its 10-year and long-term projections of spending per person for Medicare, for Medicaid, and for the country as a whole.”

The bad news is that the future of healthcare costs also looks grim for two reasons. First, the rising age of the US population will increase the burden of health care costs. Second, “the expansion of federal support for health insurance under the ACA, which will significantly increase the number of people receiving benefits from Medicaid and make some people eligible for federal subsidies for health insurance purchased through exchanges (or marketplaces). 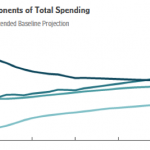 Further, economic growth in recent years has been fairly anemic and thus health care spending as a share of the economy has inched slowly higher.

In CBO’s extended baseline, net federal spending for those programs (that is, spending net of offsetting receipts for Medicare) grows from an estimated 4.8 percent of GDP in 2014 to 8.0 percent in 2039; in that year, 4.6 percent of GDP would be devoted to net spending on Medicare and 3.4 percent would be spent on Medicaid, CHIP, and the exchange subsidies.

In other words, by 2039 one in 12 dollars generated by the economy would go towards federal government health care payments.

CBO calculated a weighted average of the annual excess cost growth rates between 1985 and 2012 (the latest year for which data are available), placing twice as much weight on the latest year as on the earliest year (with a linear progression between the two). The resulting average—1.4 percent per year—serves as an anchor for CBO’s long-term projections of health care costs

Unfortunately, the CBO projections are made assuming that current law is unchanged in perpetuity. However, this is unlikely to be the case. For instance, the sustainable growth rate (SGR) requires Medicare to cut physician payments by over 25%, but this law has been reversed for over ten years in a row. Thus, it is unreasonable to expect that the SGR in its current form will ever be implemented.

How would this assumption (and a few others) affect the projected debt? CBO estimates that: